Posted on September 10, 2012 by alicethroughthemacrolens 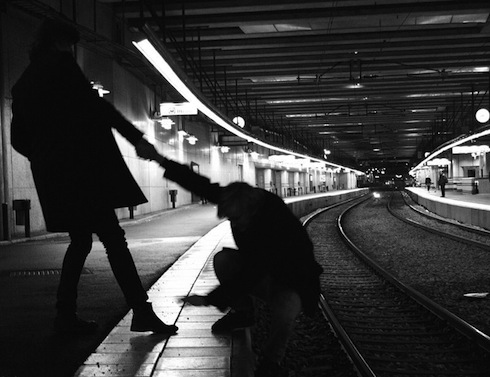 Most people of a certain age in England will remember having to study J.B. Priestley’s play “An Inspector Calls” in English class.

In short, the play is a three-act drama that focuses on a well-to-do Victorian family, and their response to a visit from a Police Inspector during the course of a single night. The Inspector is investigating the suicide of a young, working-class woman after she drank strong disinfectant. Over the course of the play, it becomes apparent that each and every member of the family had some experience with the young woman. The Inspector’s interrogation leads the audience to believe she had been fired from jobs without reason, she had been used as a mistress and rejected when she became pregnant, and she had been turned away when she had asked for help.  Each of these interactions in isolation could have been managed, but instead, each negative experience increased her feelings of rejection, humiliation, and ostracism, and caused her to eventually take her own life.

Some of you will know that I’ve been on the brink myself (I wrote about it here and here . . . oh, and I felt a bit like it here too).  Some of you will also know that I have undergone struggles with my mental health. But don’t be fooled into thinking that people with recognised mental health difficulties have the monopoly on suicidal ideation. Stressors are everywhere, and they can affect anyone of any age in any country. How we respond to those stressors and our ability to cope in stressful situations plays a large part in whether the stresses of life will eventually get the better of us.

Speaking only for myself, on the days when I have been closest to the brink, there has generally been a series of events that led to my eventual meltdown. Granted, there was probably some underlying, seemingly massive issue – financial problems and relationship struggles mainly. But it was the little, poxy, throwaway incidents that sent me over the edge . . . The “friend” who needed to “catch the [24-hour!] supermarket before it closes” for a loaf of bread, when I started to tell her how I was feeling; the cashier who wouldn’t look up at me when he handed me my change; the woman on the bus who put her bag on the seat next to her to stop me from sitting there; the mental health worker who would have been happy to talk to me, but she was on a lunch break; the shopper who grabbed all four reduced-price pizzas as I reached for one of them; and the bus driver who drove off without me, despite me banging on the door as he pulled away.

I’m not suggesting for a minute that any one of those people would have been directly responsible for my death had I subsequently succeeded in achieving it later that day. But I am suggesting that any one of them could have acted more kindly and, in the process, I may have been able to waylay the build-up of angst that was slowly spiralling out of control.

Today, I made a point of saying hello to anyone who met my gaze. It took a couple of seconds at most, and very little effort, but it was worth it to seeing the softening of an elderly lady’s face when she gave me a rather surprised smile in the cloudy dampness of the morning rush hour.

Priestley’s play brings to light the fact that each individual family member is partially responsibly for the young woman’s suicide, and the family as a collective is completely responsible for her death. And while Priestley’s primary intent was to espouse socialist objections to the inequalities of the British social class system, his message, as relayed by the Inspector is universal: “We don’t live alone. We are members of one body. We are responsible for each other.”

So when you are out and about, consider your actions towards others:

Offer a smile, lend a helping hand, give up five minutes of your time, ask the unusually quiet person if they are OK, and take a moment to listen to their answer.