Posted on February 28, 2014 by alicethroughthemacrolens

Thought I’d go for the challenge properly this week. I expect lots of buildings will be highlighted, but my favourite abandoned building, as shown in earlier posts here and here has been locked down securely to prevent any accidents.
I expect some entries may represent more profound abandonments, such as homeless people, or animals.

Sadly, once again, I haven’t risen to such levels.
Instead, I dug out a couple more pictures I took on a day trip to Whitby last October. I was walking along the jetty to go take a closer look at the breakwater and lighthouse when I stumbled across a gladiola plant … as you do …. just laying there. It can’t have been there long, because it seemed quite fresh, and the wind was ripping across the jetty. But I thought it was a beautiful deep shade of purple/indigo. Rather than move it, I decided to get down on my hands and knees … as you do … on a windswept jetty … in the freezing cold … and took a couple of pics with Whitby in the background.
If you look closely, you might even catch a passing glimpse of the gothic Whitby Abbey. 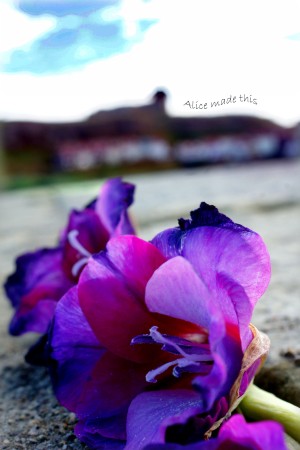