Posted on June 27, 2012 by alicethroughthemacrolens 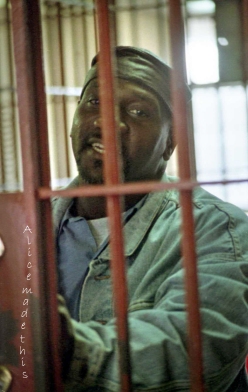 He always had a feeling it would always come down to just one person. One governor to agree to sign the release. One judge to admit his mistake. One man to cleanse his soul and confess his sin.

On Monday 25th June 2012, the Supreme Court of the United States of America held that “The Eighth Amendment forbids a sentencing scheme that mandates life in prison without possibility of parole for juvenile homicide offenders.” He was a juvenile when he was sentenced for a homicide. The state mandated that he had to be sentenced to death or to life imprisonment without the possibility of parole. This ruling applies to him. Five Supreme Justices concurred; four dissented. One vote separated the ayes from the nays. One person decided that potentially he can finally be free. If one person who said aye had said nay, this too would have been a dead end. But they didn’t. Five to four. The ayes have it.

His juvenile years are long gone, as is much of his adult life. His once defiant dreadlocks  thinned and turned to grey many years ago and have since been shaved off. But devotion to maintaining a disciplined regime to keep body and soul healthy has kept the spirit alive. His eyes still hold that flame of defiance.

For 38 years he maintained his innocence, but since the youthful age of 16, Gary Tyler has been imprisoned. Contained. Caged.

“Just say you did it, and we’ll let you out,” they teased. He would have none of it.

Three separate pardon boards recommended release. The state of Louisiana would have none of it.

Stalemate. Standoff. Each party digging in their heels and refusing to budge. The man refusing to admit any guilt; the state refusing to accept they may have made a mistake.

Now the Supreme Court has offered both parties a compromise. A win-win situation. Louisiana can release Gary Tyler from his nearly four decade long nightmare on a technicality. Louisiana won’t have to admit they made a gross error in legal and moral judgement, and Gary Tyler won’t have to rollover to the establishment. The Supreme Court, the highest court in all the land, has decided that sentencing a child under the age of 18 to a sentence of life without parole is “cruel and unusual punishment.” Nobody can contest it, because there is no court higher to lodge an appeal. The Supreme Court has decided that the cases involving all those children that received life without parole as a result of their state’s mandatory sentencing rules should be revisited. Neither party has to admit their failings. Neither has to admit any guilt.

The standoff can end.